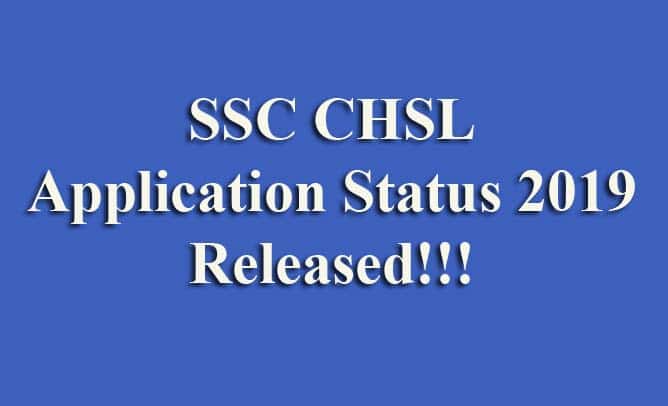 SSC CHSL Application Status 2019: SSC CHSL official notification was released on 18th June 2019 on the official website. The window was opened for filling the application form for the same for one month from April 2019. The Staff Selection Commission holds SSC CHSL annually to select candidates for the different post of 10+2. The vacancy is done for different various departments for the central Government.  The SSC CHSL Application Form Status 2019 check by candidates on this page. The official application form status released on 18th June 2019 as per the exam schedule.

Aspirants who were applied for this post who can check their application CHSL status online at ssc.nic.in. Or as given links:

The applicant who wishes to appear for SSC LDC 2019 has to make sure that they are aware of the important dates for the related exam.

The eligibility standards details for the recruitment examination are given below:

Those aspirants who want to check SSC CHSL application forms status, they can use the given steps. We have mentioned the simple tasks to know CHSL Form Status.

Those candidates who want to know the application status, they may check their details as:

The SSC has declared the SSC CHSL Application Status 2019 for all regions. Candidates also visit the SSC site, for now, more updates about 10+2 Recruitment. We wish all those candidates those will attend the SSC CHSL exams. We hope candidates obtained good marks in CHSL written exam and appointed the SSC.